where is the turkey?

There was a period of time when I was growing up out in the country in Four Forks- that all of life’s worries and concerns outside (usually) the front door could be summed up by one great existential question:

Where is the turkey? 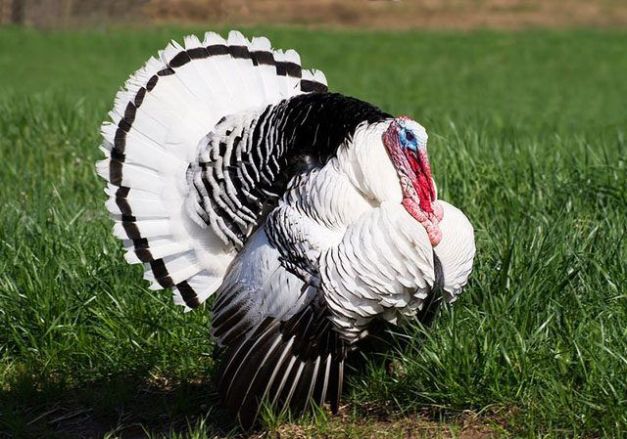 I remember hearing the tell-tale shrieks from my brother Nathan one morning. It is a plaintive howl of both pain and terror. He did not stop before he ventured forth out into the great wide open without first answering the question:

Where is the turkey?

Poor bastard, I thought as I shook my head and stirred my NesQwik. You see, one did not go to the aid of another who had been turkeyed. An encounter with the turkey left scratches, beak scrapes, and whatever trauma ensued from the panicked escape- but was not fatal. More importantly- albeit less chivalrous- intervention always had the strong likelihood of turning the wrath of the demon fowl upon oneself. The turkey attack was a lonely journey one had to solve on their own.

Remember I said (usually) outside the front door? One day I had stayed home sick from school. I heard a terrible ruckus outside. As I cautiously cracked open the front door, I was shoved aside by our dog Caesar. He did not know where he was going, but he sure knew where he’d been- under the wings of the demon fowl- and he wasn’t going back.

Not satisfied with merely ambushing the napping dog on the front porch, the turkey also stormed through the now open front door, sending me and Caesar into full flight. I ran into the kitchen as the turkey and dog headed upstairs.

No one had ever taken on this turkey before. How could this 55 lb. demon fowl be challenged? Knowing I would not feel secure or even anything other than terrified with ‘the turkey’ in the house with me- I gulped, and picked up the broom.

Rather than a sweeper or pusher, the broom became my shield from a barrage of feathers and claws. And finally after an epic monumental battle, which was more a lure and flee, like a great turkey matador, I maneuvered the bird outdoors.

One night the inebriated neighbor across the street, Mr. Cox, came over and frantically advised that his ‘fighting cock’ had got out. I told him we would certainly keep an eye out for it when he interjected “I’m afraid it will get into somebodies coop and hurt their chickens.” And, right on cue, a commotion could be heard from that direction.

Upon arrival, I shined the light in the corner of the yard and sure enough, there was the fighting cock- with the turkey stomping up and down on him. The turkey being temporarily distracted, the rooster got away and fled into the woods. No one ever saw it again.

If only a big turkey was the biggest challenge today. We all have things in our lives that we need to stop and ask ourselves everyday- where is ________? Whether it be addiction, negative people, anger, whatever, we all have things  that are much worse than a turkey waiting to ambush us as soon as we open our eyes.

We must honestly and accurately identify what those dangers are. It does you no good to be watching out for a turkey when you should be looking for the goat.

And know that, sometimes, you have to take a deep breath and grab a broom.

That is the real deal.